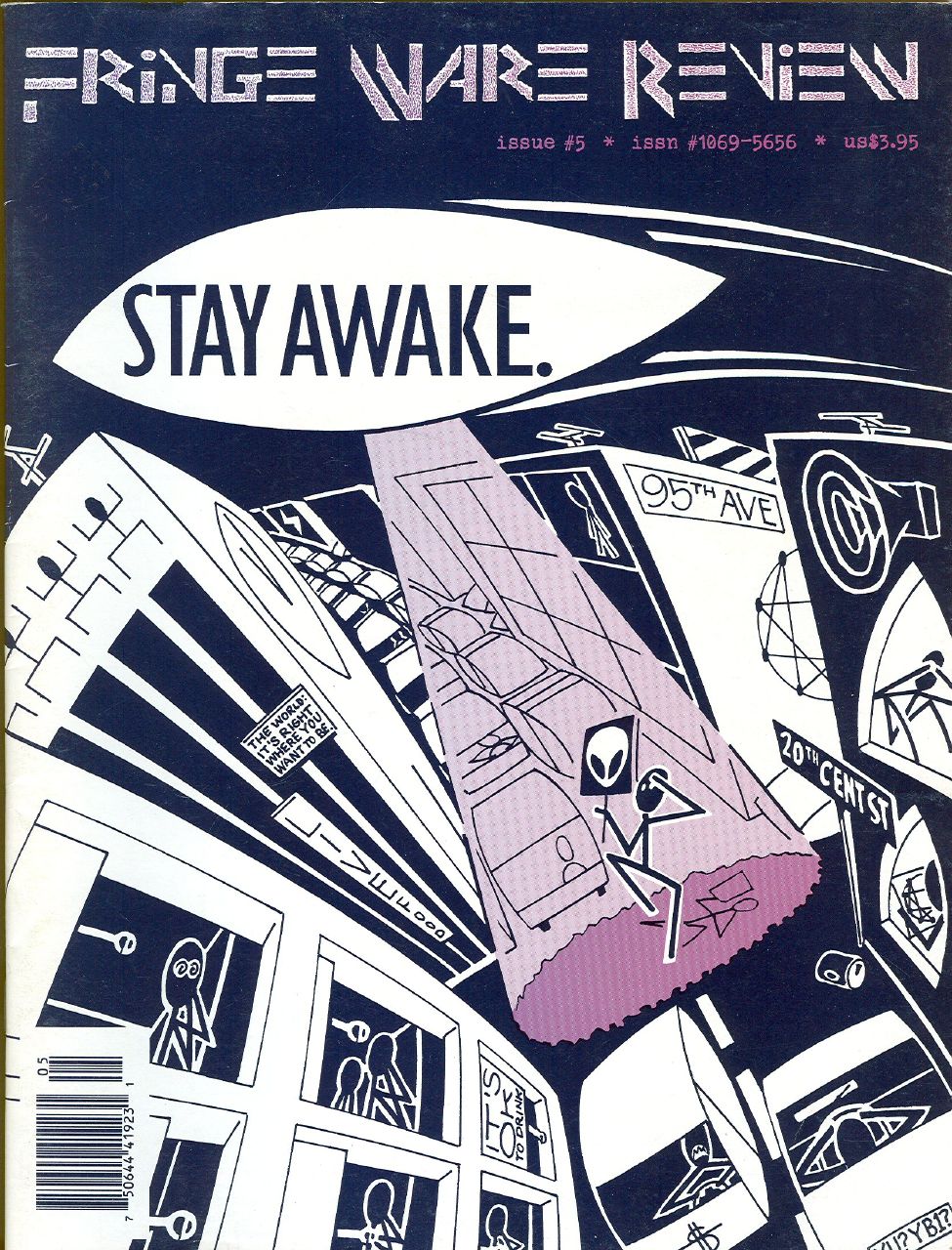 This issue of Fringe Ware Review was originally called the ‘alien invasion’ issue; our original intention was to create a sometimes serious, sometimes parodic hash of Bill Barker’s schwa, UFO theory, and cultivated paranoia for the 90s. However yer humble editor kept hanging on Barker’s stark sanserif STAY AWAKE! Though components of my alien invasion kit have never flashed red in the phenomenal world, this slogan flashes red, with sirens, every day in my consciousness, a reminder that I’m really not. Awake, that is.

Though something of an attention- deficient dilettante, I’ve focused on and returned to two similar paths throughout my life. One is the Buddhist ‘Middle Way,’ the other is Georges Gurdjieff’s ‘Fourth Way.’ I know abysmally little about either, yet they still resonate within, and I always say that someday I will get wise to these paths and start walking, wide awake. It hasn’t happened yet, and it may never…but the vibe is there, and it struck me while preparing for this issue:

We have to include something about Gurdjieff.

This ain’t easy. Folks who study Gurdjieff’s teachings are a bit reticent, not because they don’t want to tell, but because it’s nearly impossible to explain the Gurdjieff work since an understanding requires a knowledge base that most folks lack. We knew Gnosis had devoted an issue to Gurdjieff, so we asked publisher Jay Kinney for guidance. He referred us to John Shirley, a writer usually associated with cyberpunk sf, and John created the powerful piece included in this issue. And we received other submissions in the same vein. Our contributors seemed to find Gurdjieff and consciousness alternatives more compelling than UFOs, though we did also receive some UFO stuff.

In ye ed’s mind, there was some weirdness brewing. Having just completed work editing the States of Mind section of The Millennium Whole Earth Catalog, we were tuned into current thinking about consciousness and consciousness technologies. We were reading John Mack’s book, Abduction, and we were thinking a lot about Brian Wilson of The Beach Boys. Somehow all this stuff worked together.

There are two ways to approach the Beach Boys, the first of which is pretty much dismissive of their smiley-face beach party hotrod music as the crewcut-clean sorta MOR rock that, well, Nancy Reagan might like to hear (she defended their selection to play one 4th of July in Washington when James Watt wanted to put ’em out). This is a response to the Mike Love model of the Beach Boys, and it’s valid. But there’s a whole other thing about the Beach Boys, and it’s really about Brian Wilson and to some extent his brother, the late Dennis Wilson. The Wilsons were sons of Murry Wilson, and for many years they were his meal ticket. Murry was real, and he was crazy: no Father Knows Best model here, this was a guy who could jump naked on the kitchen table, beat his chest, and proclaim his position as king of the house. When you read Brian Wilson’s biography, you find just this bizarre kind of shit…and you learn that, while much of the world saw the Beach Boys as essential pop effervescence, their creative fountain Brian was Losing His Mind. He was eating unimaginable combinations of drugs, living a sort of catatonic existence, his creative powers waning… And his brother Dennis, the one Beach Boy who actually hit the surf with a vengeance, was getting pretty screwed up, too…eventually drowning, evidently while under the influence of god nose what diversity of brain- whacking chemicals. The contrast between the lives of Brian and Dennis on the one hand, and the Beach Boys image on the other, is what interests me most about the Beach Boys. Brian made lush, incredibly beautiful music, yet his life was shit. The average person cruising down the boulevard hearing distant strains of ‘Good Vibrations’ and smiling recognition gets but misses the essence of the music…the essence is to make you smile, yes, but the essence is also anesthetic: it’s that postwar denial that took America in the 50s and never quite went away…it’s like sleeping through painful surgery. Technicolor, stereophonic sound, immersive entertainments like Cinemascope, Cinerama, etc…or television’s soft secure glow from a corner of the room. Better: a transistor radio playing tune after tune & commercial after commercial as you drift to sleep… You are not awake. Someone has your brain locked. Remain where you are. Do not resist. Give or do whatever they ask. Forget everything that happens.

UFO abductions seem real as anything when you read John Mack’s accounts of interviews with abductees, when you see video of abductees talking about their experiences and the impact on their lives…it’s tougher and tougher to deny the reality of these strange invasions. From the descriptions, it appears that we’re living on the farm. That’s the good news; the bad news is that we’re the livestock! Breeding stock, that is. “They” seem to be swiping semen from our males, and implanting our females with hybrid creatures, part alien, part man. Guess they’ve been doing this since the first monkey-man…was he developed? Sheesh. This would blow gaping holes in the anthropocentric philosophical constructs that glue self together, it would be like blowing the foundation of the temple constructed from western materialistic philosophy…we approve! So we’ve been invaded, so we’re chattel: what’s new? Any one whose brain’s been sucked dry by the political and bureaucratic machines of states and corporations in the premillennial world has been invaded, colonized, farmed if only for ox-labor. (John Mack actually theorizes that this ‘hybridization’ project, if it exists, has a different purpose “that serves both of our goals, with difficulties for each.” Though alien invasion/abduction is an effective metaphor for the human practice of brainsuck exploitation, we won’t pretend, assuming that these aliens exist, that we know what they’re up to. We’ll try to stay awake, though, ’til we understand the incomprehensible….)

One of Mack’s abductees, quoted late in the book, sez “Something else is interested in us that we don’t want to know about. This is happening. It’s not just a happy little dream where you can feel like you’re important. This is really a responsibility, and things that you don’t want to see happen are going to happen.” Though abductees seem to bury memories within layers of memory that most of us don’t touch, they’re retrieving them now, and as they retrieve them, they drop the prevalent cultural attitude of denial and begin to WAKE UP. What are they waking to? Mack says “With the opening of consciousness to new domains of being, abductees encounter patterns and a design of life that brings them a profound sense of interconnectedness with the universe.” Does this differ from Buddhist perception, or from the subtext of the Gurdjieff work? Since I’m a dilettante, I can’t really answer from experience, but it seems intuitively right. There’s an evolution now, and it’s happening on the fringes beyond denial. It doesn’t matter whether you believe in alien abduction, UFOs, satori, nirvana, the devil, the deep blue sea, the SubGenius, or the Perfect Wave: it’s not what you believe, but how you exercise your consciousness that’s important.

In Buddhism, and possibly in 4th Way, gnostic Christianity, etc. there’s little debate about god…’god’ is an edifice we’ve built within our collective unconscious to represent the unknowable, and since it’s unknowable, it’s beyond the scope of our concern. Instead we focus on the only reality, that which is here and now, and we see process and change for what they are: uncertain, unfathomable. We find solace not in theistic or materialistic fantasies, but in community. Brian Wilson, damaged, alienated, was trying through his music to create an essential harmony that he’d lost, or possibly never known…though he never surfed he was looking for that perfect wave.

In the 1990s, with the Millennium approaching, so many of us who surf the fringes, within ‘cyberpunk’ or other alternative scenes, are working through a kind of disillusioned cynicism; our heroes have screwed the proverbial pooch and we’ve seen the human failings within everyone and we’ve seen the sleazy corruption at the core of our institutions and we’ve seen exploitation at the heart of our corporate structures and this is our life. In the 60s, when we had an early sense of the contradiction between the American middle-class fantasy of whiter whites and bluer blues and the intense suffering within our own ghettos and the ghetto nations of the world, we built an underground that merged with what we’d once called the death culture, and we acquiesced, hiding within air- conditioned nightmares across spaceship earth as it spun out of control. We were inoculated by daily doses of blandscrew representations of ‘news’ so that we could somehow ignore the content of the suffering described by the anchors and the correspondents and the victims-on-scene. If you read an account of this world in a science fiction novel, you’d say to yourself, I’m glad the world’s not like that, but it is! So what do you do?

If you can’t save the world, save the neighborhood. This is similar to think globally, act locally, but with stronger reference to human interdependence. Ignore geographical constraints and make community wherever and however you can, i.e. plug into a network of folks with whom you have affinity, and support your friends. Ignore the established culture, which creates market blocs where there should be neighborhoods, which creates tightly controlled, highly manipulative mall environments where there should be interactive street markets. Above all, Stay Awake! Don’t allow the most truly alien and dangerous forces (churches, politicians, corporate propagandists) to colonize your mind and steal your soul. It’s helpful to take an inventory that includes you and all your possessions, and consider what they can and can’t take from you. They can’t take your mind, and they can’t take the moment…

As for the aliens and their UFOs, well, we’re still watching and waiting. But meanwhile we’re looking for something else, too, the right kind of surf, the right vibration…