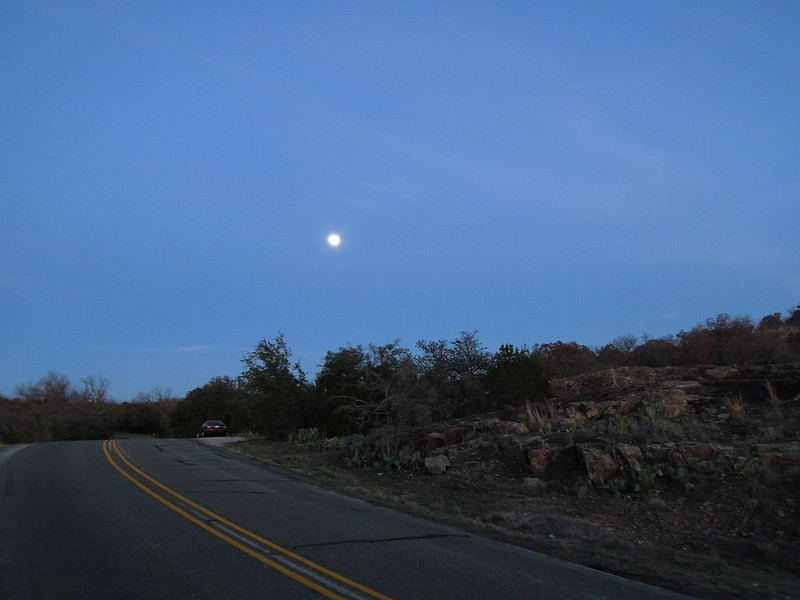 A moonlit night near Inks lake. (And a test of Flickr image embedding…)

Of course we’ve been tracking the fires in the Austin area, especially the massive complex fire in Bastrop, and I’ve been thinking how to make sense of the disaster. Marsha and I drove toward Bastrop, Texas Monday to get a better look, not expecting to get very close (we didn’t want to be in the way). We drove within ten miles – not close, but close enough to capture photos of the massive tower of smoke: http://www.flickr.com/photos/weblogsky/sets/72157627607062626/ Jasmina Tesanovic was there the same day, and posted her thoughts here.

The whole area is a tinderbox after an unprecedented drought, and a great, now dangerous, feature of the Austin area is that cities and suburbs here have pervasive greenspaces, and we’ve built residences and other structures close to, and surrounded by, foliage that is now potentially explosive.

The current disasterous fires have a climate change signature; they’re products of the record Texas drought – at least exacerbated by, if not caused by, global warming. They were fanned by strong, oddly dry, winds from tropical storm Lee, and while no single storm is specifically related to global warming, their increasing number and severity may be related. While I’m not looking for a climate change debate here, it’s frustrating that the issue has been politicized on both left and right, and leaders have ignored scientific consensus for so long that prevention is no longer an option. We should be thinking about adaptation, but that’s not happening, either.

In fact, we’re not prepared for disaster. Marsha and Jasmina returned to Bastrop Tuesday hoping to volunteer, and Marsha spent much of Wednesday as a volunteer at one of the evacuee shelters. So much is happening so quickly, it’s hard to manage – and there’s no clear leadership or structure. The fire has destroyed 1,386 homes, and it’s still burning. Much of the attention and energy is focused on core concerns. On the periphery of the disaster, there are too few leaders or managers and too many details to manage.

This is a metaphor for global crisis. Economies are challenged and systems are breaking down; at the same time, we have real crises of authority. At a time that demands great leadership, we have no great leaders. Politicians left and right are stumbling. In Texas, which has needed great insightful leadership for some time now, the governor dismisses science and leads rallies to pray for rain.

In difficult times past, great leaders have emerged. Where are they now?

View a triking set of photos from the National Geographic Photo Contest. Galleries here. These photos reminded me that the world is so much larger than my Twitter account…