My favorite-so-far Bruce Sterling post in the State of the World conversation:

“Following on from John Payne’s comments in <76>, are the robots
coming for our jobs? Is a certain amount of unemployment going to end
up as part of the system and, if so, what happens next?”

*It’s so interesting to see this perennial question coming into vogue
once again. When I was a pre-teen first discovering “science fiction,”
that automation dystopia story was all over the place. Even on the
cover of TIME magazine. See this Artzybasheff computer monster, all
busy stealing guy’s jobs? Looks oddly familiar, doesn’t it? 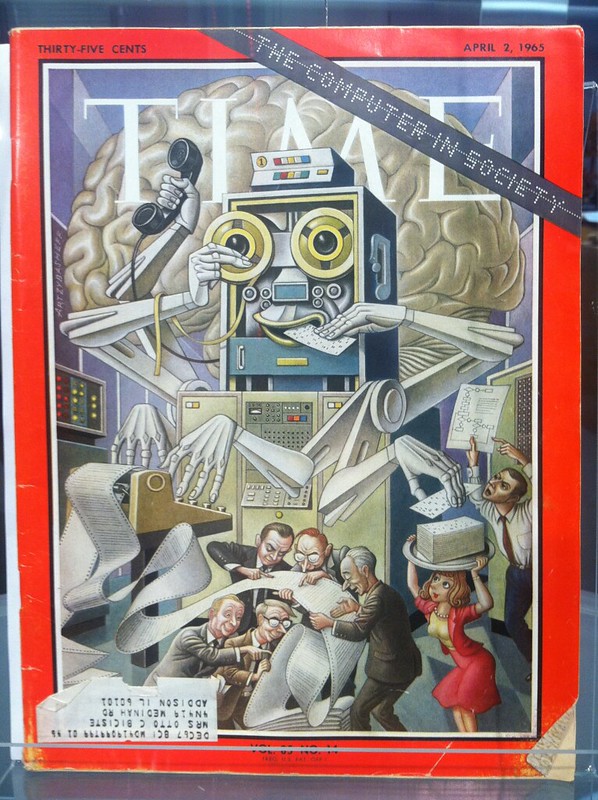 Of course that issue pre-dates me by a long chalk. It’s also the folk
song of John Henry the Steel-Drivin’ Man, who breaks his heart
defeating the boss’s Steam Hammer.

I can tell you what’s NOT gonna happen with “robots.” Nobody’s gonna
defeat the logic of the assembly line by starting a Pre-Raphaelite Arts
and Crafts commune where people shun the Robot and make hand-made wall
tapestries. That’s been tried eight thousand different times and
places. It never works for anybody who’s not Amish.

Framing the issue as “robots coming for our jobs” is rather a moot
point anyhow, because the blue-collar guys who “own” assembly “jobs”
have zero input on whether robots get deployed or not. What practical
difference does that question make? No modern salaried employee
anywhere has the clout to defend a “job” from “the robots.” The
investors deploying the robots are serenely unworried about Luddite
saboteurs or crippling labor-union strikes. Those possibilities of
working-class resistance were de-fanged ages ago.

So, you know, either they automate some processes at the cost of human
labor, or they don’t. Somebody’s alway gonna try it, and in some
areas it works out rather better than it does in others, but the basic
robot story isn’t robots, it’s “whatever happens to musicians will
eventually happen to everybody.”

Apparently this latest little robot-vs-job flap gets most of its
impetus from two things, a cool new assembly robot created by Rodney
Brooks and a typically Emersonian intervention from Kevin Kelly.

So, here I’ll tell my Rodney Brooks story. I met the guy once, at
some forgettable event in Washington DC, and after the panels were
over, Prof Brooks and I ventured into the bar.

So, I was nursing a whiskey sour, and I was like: “So, Doctor Brooks,
I know a little about your work, and –”

“So, Rod — level with me about this MIT scheme you have to automate
the movement of insect legs. How’s that supposed to work, exactly?”

So, Rod was nothing loath, and he was pretty well going at it hammer
and tongs, while I was asking the occasional provocative sci-fi style
question — stuff like “so, how does the cube-square law work out when
the robo-insects are walking on the ceiling?” — because we sci-fi
writers dote on MIT.

Then I happened to glance across the bar, and I saw that our bartender
was “frozen in disbelief.” He was so amazed by what Brooks was saying
that his glass and his cleaning cloth were rigid in his unmoving arms.
This bartender had the affect of a sci-fi movie android with a power
failure. It was the only time I’ve ever seen that figure of speech as a
genuine aspect of human behavior.

So, I give Rodney Brooks a lot of credit, he’s a fascinating guy, I’m
glad to see him kept busy on things other than, for instance, an
MIT-style Vannevar Bush Manhattan Project at an undisclosed desert
location. I’m confident that Rod’s new manipulator is pretty snazzy.

But let me ask this: if an assembly-line device is going to “take our
jobs,” wouldn’t a 3dprinter also “take our jobs?” Why do we treat them
so differently? I mean, they’re both basically the same device:
automated mechanical systems precisely moving loads in three dimensions
by following software instructions.

So how come the Brooks robot is framed as a sinister job-stealing
robot, while a 3dprinter is framed as a printer, like, a cool nifty
peripheral? Didn’t digital printers also take a lot of “people’s
jobs?”

Besides, a Brooks robot is just imitating human-scale movement while
3dprinters create objects in micron-accurate ways that no human can
possibly do at all. So clearly the 3dprinter is a more radical threat
to the status quo.

Along this same line: Chris Anderson, late of WIRED, has got a new
book out about “Makers.” I read it. It’s all about how network society
cadres with 3dprinters and open-source schematics and instructables
are going to create a “Third Industrial Revolution.” Great, right?
Okay, maybe Makers take over the world or they don’t, but how come
nobody says “A Third Industrial Revolution means those Makers are going
to take our jobs?” Because they would, wouldn’t they? How could they
not?

Shouldn’t this prospect be of larger concern than Rodney Brooks’
latest gizmo, one among hordes of assembly line robots that have been
around for decades now? An “Industrial Revolution” should *almost be
definition* take everybody’s jobs. But the general reaction to
Anderson’s book is that the guy is *too optimistic,” that he drank his
own tech-hype bathwater and is having way too much fun. Isn’t there an
inconsistency here?

Then there’s the latest Kevin Kelly argument, which is more or less
about how robots are gonna take everybody’s jobs, but fine, that’s
great, especially if they’re sexbots. There’s nothing sparkly-new
about this line of reasoning, it’s very Automation Takes Command. The
pitch is that robots take the dull dirty and dangerous jobs, which
frees us to become, I dunno, humane speculative creatives like Kevin
Kelly, I guess.

However, I don’t believe automation has ever worked like that; there’s
no creeping wave-line with “robotics” on one side and “humanity” on
the other. Playing chess is very “human,” but Deep Blue is a robot
that can kick everybody’s ass at chess. You can claim that “Deep Blue”
is not “a robot,” but come on: just put a tin face on him and give him
a manipulator arm. Instant “robot.” Robotic has never been an issue
of mechanical men versus flesh men, like in a Flash Gordon episode.

The stuff we call “robotics” today is more like Google’s “robot car,”
which is not some Karel Capek man-shaped “robot” of the 1920s; the
Google Car is the Google Stack with wheels attached to it. Similarly,
“Google Glass” isn’t virtual-reality supergoggles, it’s the Google
Stack with a camera, Android mobile software and a head-mounted
display. Will they “take your jobs?” How could they not?

If you lose your job as a bus driver because a Google Bus took your
job, you didn’t lose it to a “robot,” you lost your enterprise to
Google, just like the newspapers did. Don’t bother to put a sexbot
face on the silly thing, it’s Larry and Sergei & Co. Go find a
musician and buy him a drink.

Fighter pilots are “losing their jobs to robots,” to aerial drones.
Are those the “dull dirty and dangerous” jobs? Heck no, because
fighter jocks are romantic folk heroes, like Eddie Rickenbacker and the
Red Baron and George Bush 1.0. When most flight work is carried out
by “robots” (actually by GPS systems and databases, but so what), are
we somehow going to discover a more refined and human way to fly? Will
we be liberated to fly in a more spiritual, humanistic, Beryl Markham
poetic aviatrix kind of way? I very much doubt that. I’m pretty sure
we’ll stop “flying” entirely, even if we anachronistically claim we’re
“flying” when we’re zipping around in sporty ultralights letting drone
systems do all the labor.

Bookstore clerks never had “dull, dirty, dangerous” work, they were
the mainstays of humanistic commerce actually, but Amazon is a Stack.
Amazon’s all about giant robot warehouse distribution logistics. It’s
all databases and forklifts in the Amazon stack, so of course “robots”
took the jobs of bookstore clerks. Bookstore clerks imagined they were
chumming around with the literate community turning people on the Jane
Austen, but the high-touch, humanly clingy aspect of this line of work
changed nothing much about its obsolescence.

So it’s not that “robots” take “our jobs.” It’s more a situation of
general employement precarity where applications built for mobile
devices and databases can hit pretty much anybody’s line of work, more
or less at random, without a prayer of effective counter-action.
Right? Let’s move right along, then!

That being the case, “what ought to be done?” Well, if job security
of all kinds is going to be made precarious indefinitely, then the
sane, humane thing to do is clearly to socialize security and put
everybody on a guaranteed annual income. Brazilian-style socialism:
keep your nose clean, keep the kids in school, and we fee you off and
you can go buy whatever produce the robots have cooked up lately.

Obviously the American right-wing isn’t gonna go for this wacky
liberal scheme; bailing out the “takers” of the 47% is their worst
Randroid nightmare. But what people never understood about the John
Henry story is that we have no steam hammers left. The robots “take
your job” and then the robots *keep changing at a frantic pace,* the
robots have the lifespans of hamsters. We’ve still got plenty of
muscular, human John Henries, but his steam hammers are all extinct.

Look what happened to Nokia. These Nokia guys had the classic Wired
magazine bulletproofed dream jobs. They’re not John Henry. They’re
creative class, computer-literate, inventive, super-efficient, global,
digital, Asperger’s high-IQ types… They got annihilated in 18
months. Not by “robots” but by Google and Apple. However, well, same
difference really.

What kind of “jobs” do Republicans have to offer themselves, when
their nominee was a corporate raider, and their top financier is a
weird Jewish casino owner up to the eyebrows in Macao? That’s not
exactly the Protestant work ethic happening, so, well, I dunno.

It might still work, just needs more political pretzel-bending. Don’t
use the word “guaranteed income,” farm it out to Fox News for semantic
re-framing. Toss in the “values requirement” that your annual income
requires you to wear Mormon undies, go to tent revival meetings and
own and display a handgun. They’d line up for it.